Okay, VPNs are fantastic. Most people should be using one. But for the more nomadic among us, it’s much more of a necessity—ranking just below a stable internet connection.

In this article I’ll guide you through running your own cloud based VPN. It’s surprisingly easy, and requires no advanced technical skills. You will be able to follow this guide, even if you’ve never used a command line interface before.

But first, let’s take a step back and ask “why?”

Why should you even use a VPN to begin with?

Perhaps the most important reason to use a VPN, is to stay safe when using public WiFi. You’d be surprised at the amount of sensitive information (credit card details, passwords, the works) that even an amateur hacker can get at whenever you log on public hotspots with your laptop or phone.

It doesn’t matter if it’s your local Starbucks, a busy airport, or a five star hotel. Password protected or not, you’re not safe from other people logged on to the same network.

And anyone can order a “WiFi Pineapple” online for less than $100, and use it to create lookalike WiFi networks, and launch man-in-the-middle attacks to get all your passwords—even if the page you’re logging into normally uses HTTPS.

Think about that the next time you’re logging on “FREE Airport Wifi”, “Starbucks Free Internet” or anything else.

There are countless more reasons why you might want a trustworthy VPN:

Now that we both agree on the importance of having a VPN by your side, let’s look at your options.

Why I never use free VPNs

As people often say in the tech industry, “if you are not paying for it, you are the product”.

There is some truth to this, especially if the service you’re not paying for has a significant cost associated with it. That’s definitely the case for VPN services.

While a service like Wikipedia can afford to be free to most users (they still rely on donations), the marginal cost of serving up a Wikipedia page is practically zero. It’s usually only a few kilobytes of data.

On the other hand, running servers handling the transfer of hundreds of gigabytes or even terabytes of data for thousands or millions of users is not even close to being free. Companies providing that kind service for “free” need to make their money elsewhere.

How do “free” VPN providers make their money, you may ask?

They usually offer fewer features, fewer servers, and much worse performance than their paid counterparts.

You might not agree, but in my opinion that’s not remotely worth it to save a few bucks.

Finally, time to get to the point.

I’ve written this guide in such a way that you should be able to follow it, even if you’ve never used a command line before.

If something’s not clear, let me know in the comments, and I’ll use your feedback to improve the guide.

The guide is written using macOS, as that’s the operating system I use, as well as most of my readers. The first few steps (where we install Algo’s dependencies) are a bit different for Windows and Linux users, but you can find instructions for your operating system here (step #3). Then jump here to continue following the rest of this guide.

Here’s how you get up and running with your own cloud based VPN server in about 10 minutes.

Step one: Downloading Algo and navigating to the Algo folder

Download algo, unzip the file and place the algo-master folder where you’d like it, for example on your desktop or in your home folder. 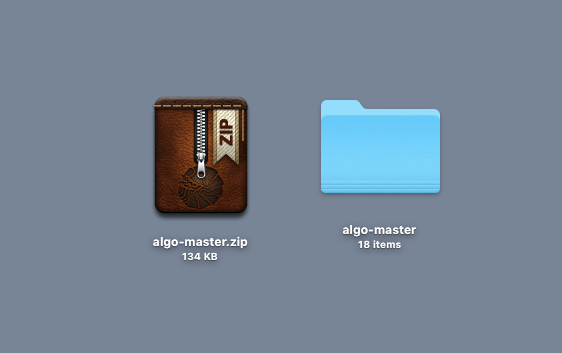 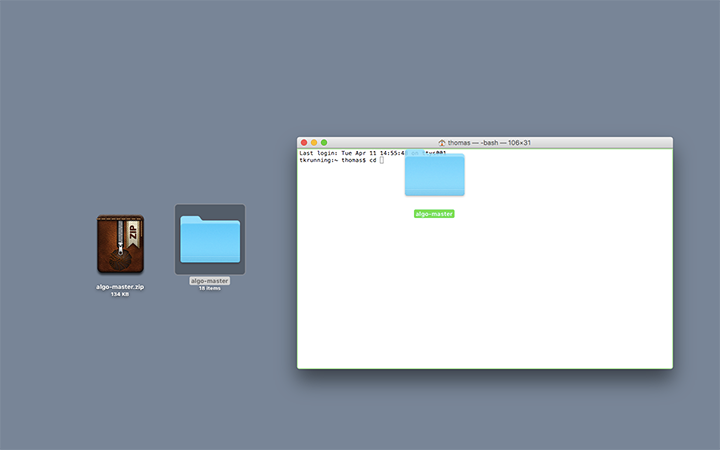 Side-note: If you have never used the developer tools on your Mac before, you might need to install Xcode Command Line Tools. If you are unsure, type xcode-select -p and hit enter. 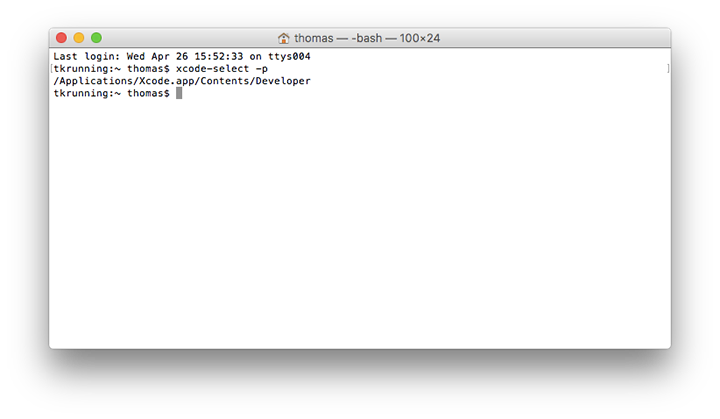 If you see the a path to where Xcode is installed, (e.g. /Applications/Xcode.app/Contents/Developer) then you’re okay. If not you need to complete the installation of the command line tools. Luckily that’s quite simple to do.

Just type xcode-select --install and hit enter. You’ll be asked if you want to install the tools now. Click Install. 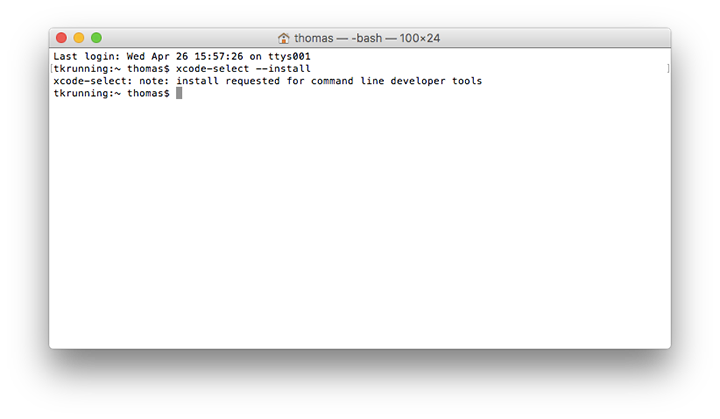 Click Agree to the license agreement and run through the rest of the installer. Once finished, you can safely move on to the next step.

Make sure the terminal window is in focus, then hit enter: 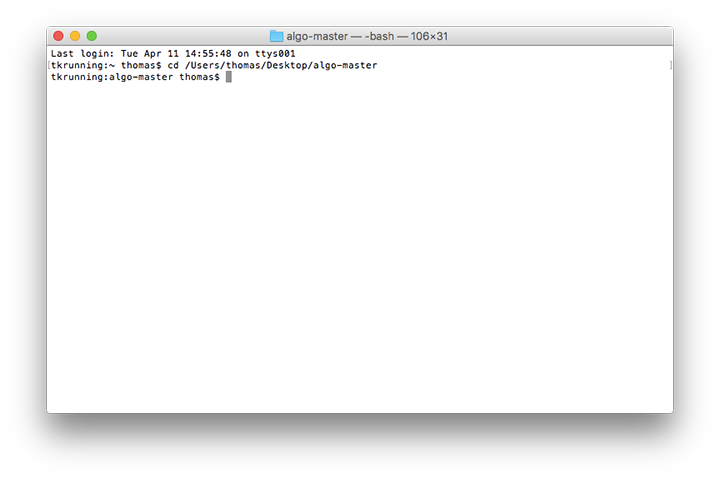 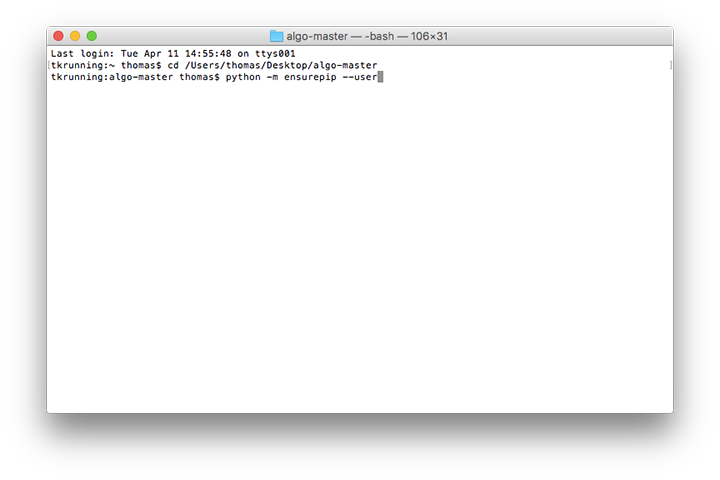 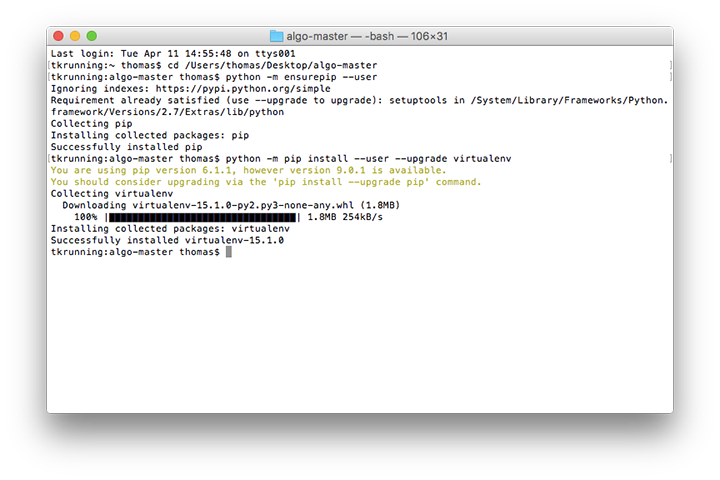 From here on out, the steps should be the same across all operating systems.

Be patient, the installation process will run for a while… 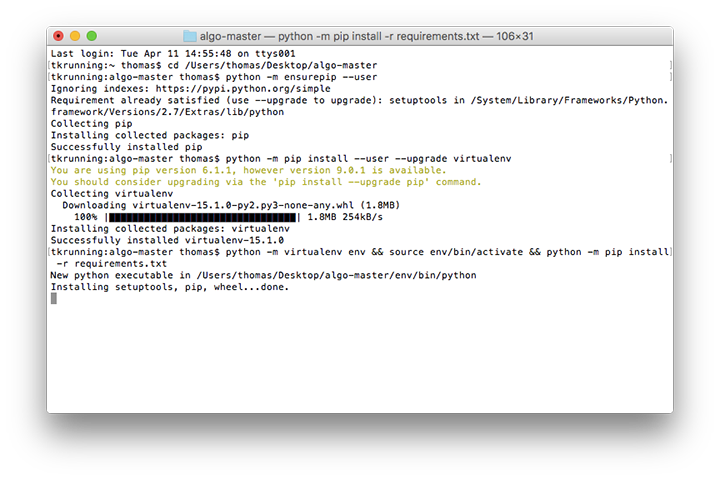 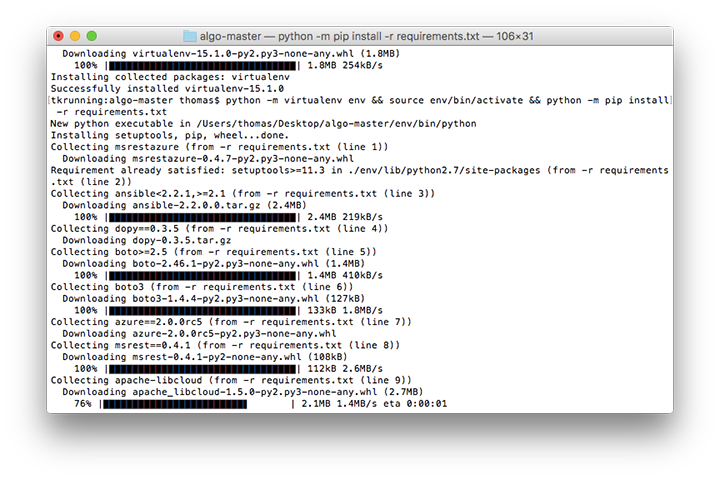 …until you see this: 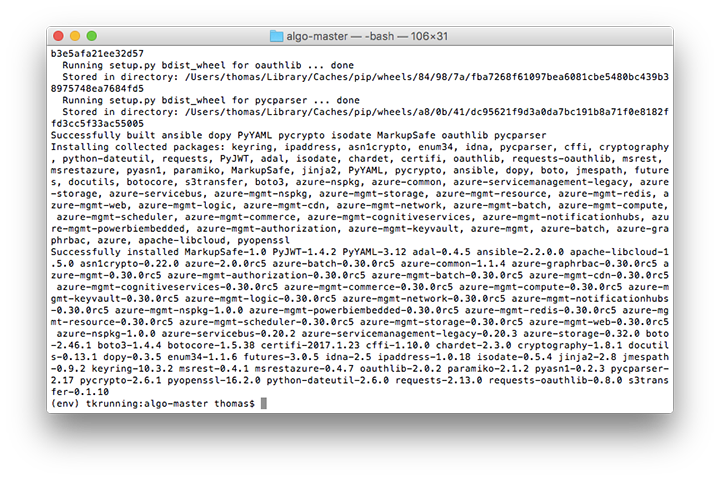 Note: If you see something significantly different (potentially including some strange error messages) you probably don’t have the necessary developer tools on your Mac and skipped the bonus step above. Go back and do all the following steps again.

Now all of Algo’s dependencies have been installed! Time to fire up your own server!

Well, almost, first you need to configure it.

Find the file config.cfg in the algo-master folder. 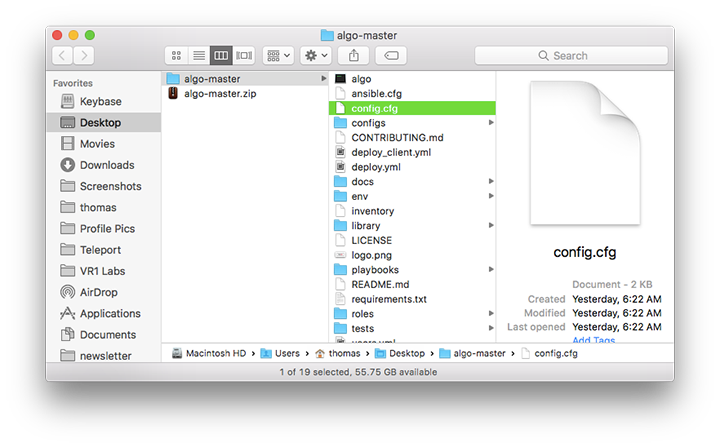 Open it in a text editor. You only need to change/add usernames for any person you would like to give access to your VPN. Here I added two users, “thomas” and “nomad”:

Feel free to add as many as you’d like (on new lines).

Now head back to your terminal window, and enter ./algo. Hit enter. 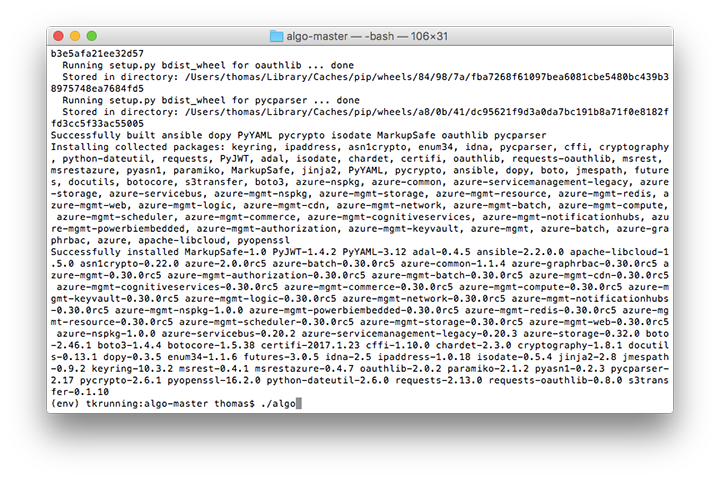 Now the installation process will begin, and you will be asked a series of questions.

First up, you have to select a hosting provider. In this guide we use DigitalOcean, since it’s the easiest to set up.

To select it, type 1 and hit enter. 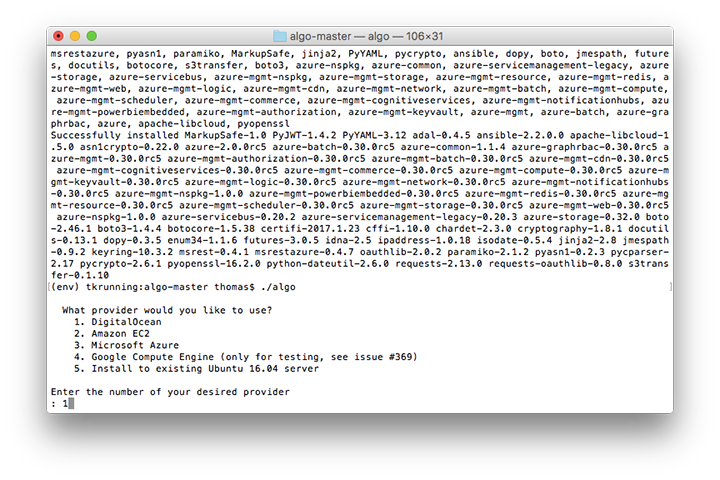 Next you will need to get an API key from DigitalOcean. If you don’t already have an account, sign up here. By signing up via my referral link you will get $10 in free credit—enough to run your VPN continuously for two months.

Make sure you have a credit card attached to your account, then head over to the API section to generate an API key. 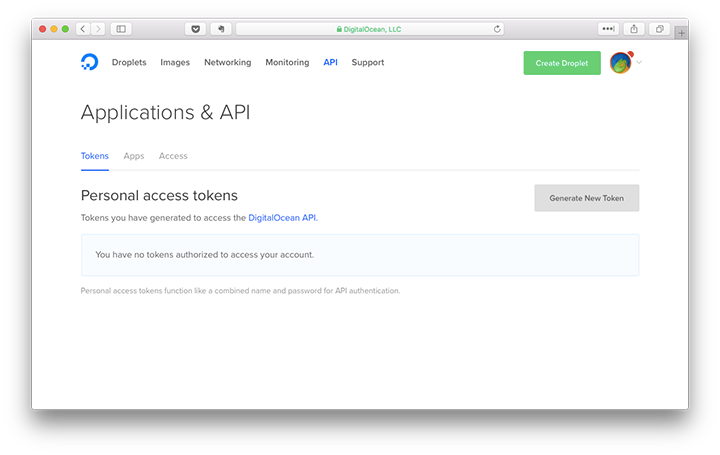 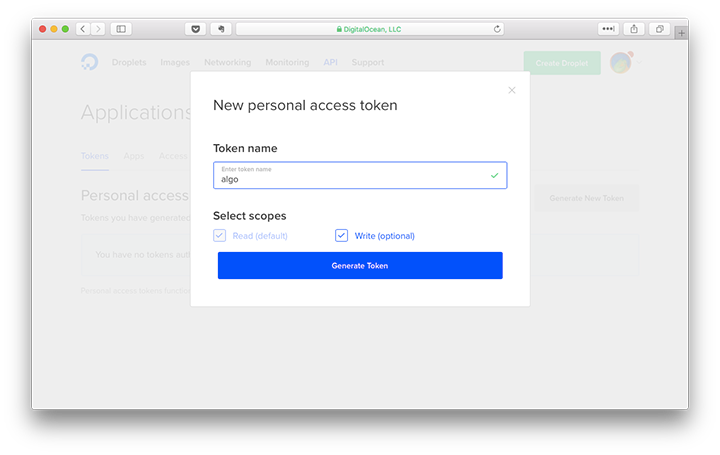 Give your token a name, e.g. “algo” so you remember what you used that token for. Hit Generate Token. 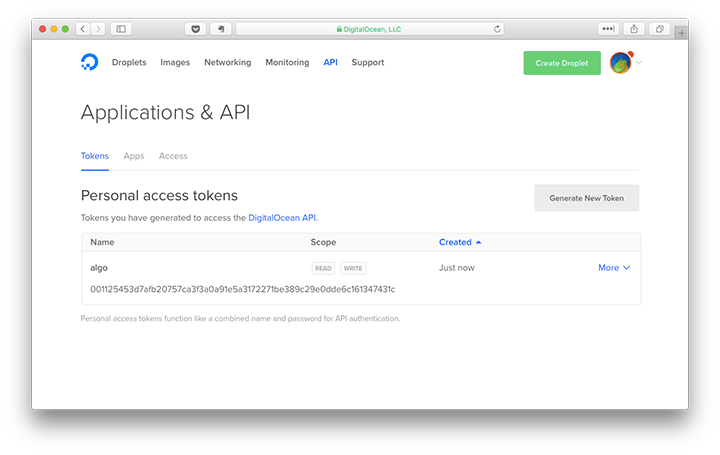 Click the token to copy it to you clipboard. Paste it into your Terminal window (⌘ command + v). You won’t see it there after pasting it, but that’s okay. Just hit enter and it will move to the next question. 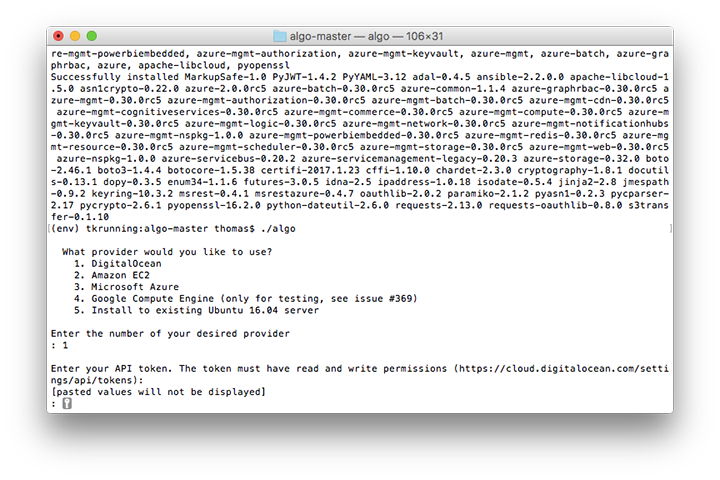 Next you will be asked to name your VPN server. It’s not important what you enter. In my example I named it “nomad-vpn”. Hit enter. 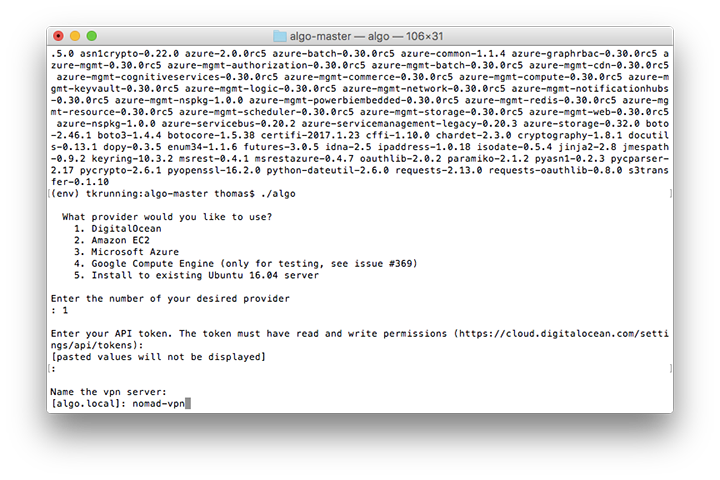 Now it’s time to select a location for your VPN server. Generally it’s better to have a server that’s close to where you are physically, as it will have better performance and less latency. There might be exceptions to this, however. Especially if you want to appear as being in a different country, in order to get around geographic content restrictions, also known as “geo fencing”.

Just type in the corresponding number and hit enter. 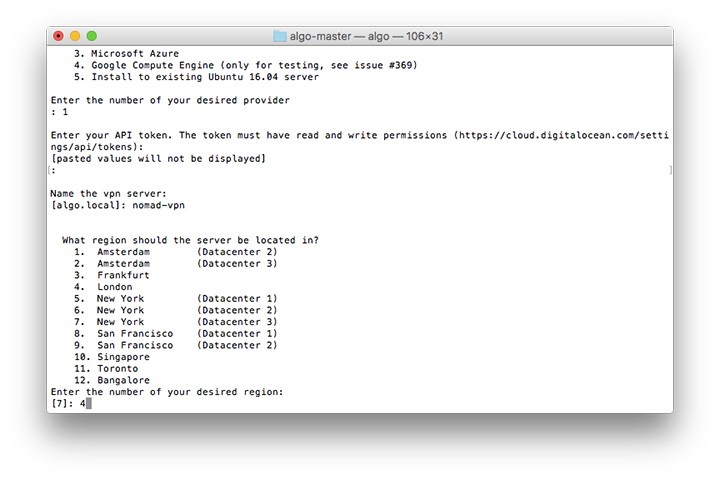 Now you will be asked a handful yes/no questions, some easier to understand than others. What you reply is up to you, but if there’s a question you are unsure about, just reply no.

One option that can be interesting is “VPN On Demand”, meaning that the VPN will connect automatically whenever your Mac or iOS device is connected to a WiFi network you haven’t explicitly specified as trusted. 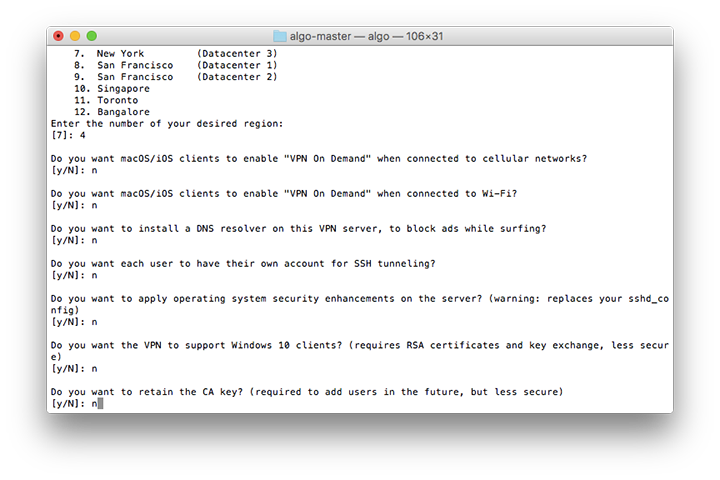 Okay, that’s it… Now you can sit back and relax for the next 5 minutes or so, while your VPN server is being automatically set up. 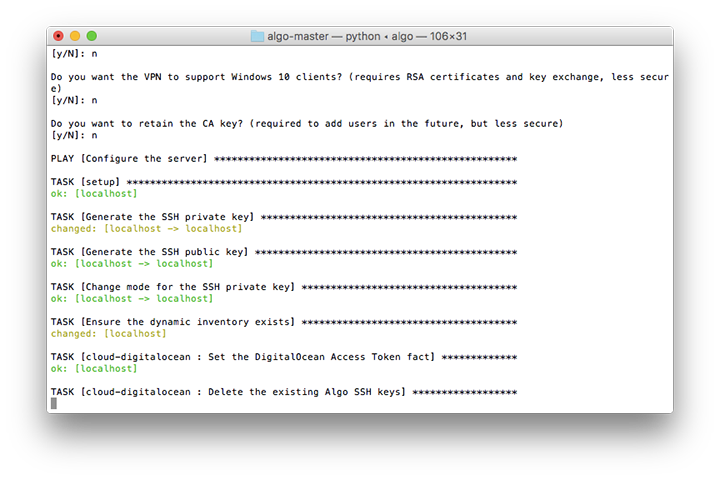 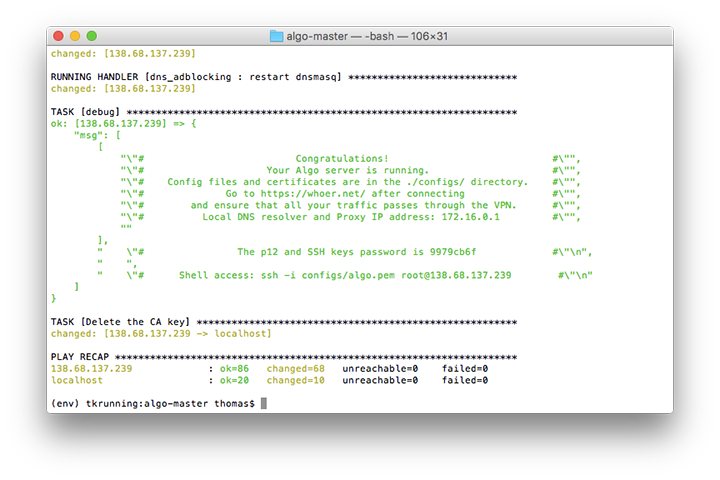 Note: If instead you get an error along the lines of ansible-playbook: command not found you probably don’t have the necessary developer tools on your Mac and skipped the bonus step above. Go back and do all the following steps again.

In your algo-master folder, then the configs folder, you will find a new folder with a name corresponding to the IP address in the previous screenshot. In there you will find .mobileconfig files for all of the users you created.

To set up your VPN on your iOS device such as iPhone or iPad, just open AirDrop on your Mac and drag the .mobileconfig file on top of your iDevice, like this: 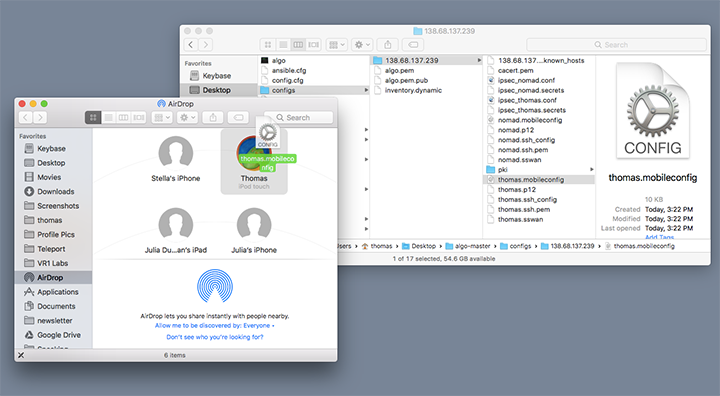 In a few seconds, the VPN server will be installed on your mobile device. You’ll find it under Settings > VPN.

To install it on your Mac, just double click the .mobileconfig file. You’ll be asked for your Mac password, and that’s it! You can manage your VPN connection in your Network preferences: 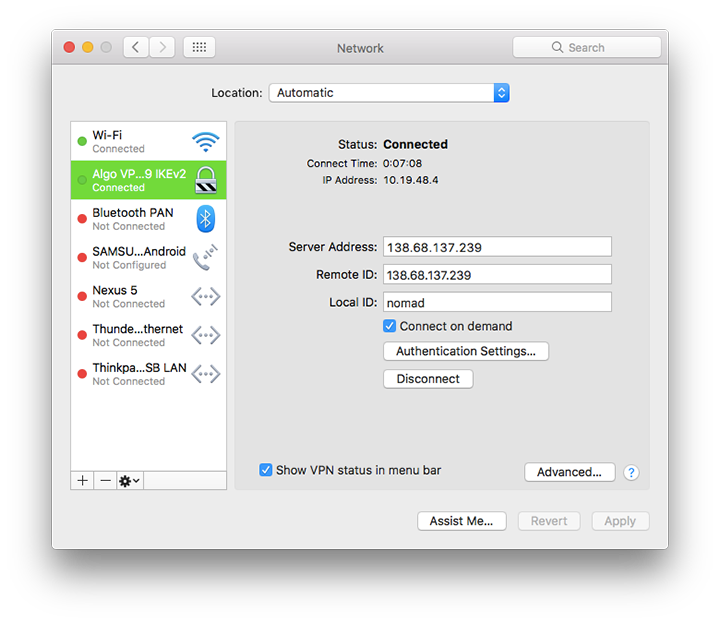 If you enabled the “Connect on demand” option during the setup process, you can disable it here if you want to prevent the VPN from connecting automatically.

When it’s time to “destroy” your VPN server

If you don’t do anything further, your VPN server will continue to exist in perpetuity. The cost of running one of the smallest “droplets” on DigitalOcean continuously is $5 per month (or $0.007 per hour if running less than a month).

As you can see, it comes with 1TB of transfer per month, which should be more than enough for most people.

But if you no longer need your VPN server, or want to switch to another location without paying for two servers at the same time, it might be time to “destroy” your VPN server.

You will find your server listed under Droplets in your DigitalOcean account. 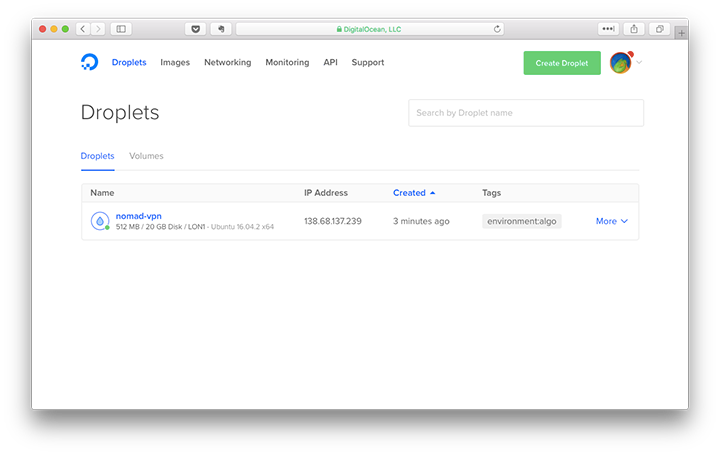 If you want to spin up a new server, just jump to the section on “Starting an Algo server” and make sure that your Terminal is in the algo-master directory (hint: use the cd command and drag the folder into terminal).

Alternatives to running your own server

Did you fall asleep halfway through this guide, or do you require a VPN solution with no logging of your traffic, or just an easier user interface and better cross-platform support?

Fair enough. Running your own VPN server isn’t for everyone.

I’ve tested dozens of different out of the box VPN services over the last few years, and I can easily recommend the following:

Feedback and questions are more than welcome in the comments!

How to Build Your Own Virtual Phone in Minutes