N26 has long been my favorite bank in Europe, and for good reason. Their user friendly app, low fees, useful integrations—like Transferwise—and their investment module puts them miles ahead of most of the competition.

The fact that you don’t have to show up in a physical branch anywhere makes it an even sweeter deal—especially for the nomadic crowd.

I’ve written extensively in the past on why I love N26 so much, so if you’re still not sold check out this article.

The process is quite quick and easy, but if you’re unsure about anything, keep on reading for all the details you might possibly need…

Anyone can open a N26 Bank account, as long as they are resident in the EU or EEA. In order to open an account, you need a mailing address in one of the countries where N26 operates for them to send you your Mastercard.

As of this writing, N26 operates in all the Eurozone countries, except Malta and Cyprus. That leaves Germany, Austria, Spain, Italy, Ireland, Slovakia, Greece, France, Belgium, Estonia, Finland, Latvia, Lithuania, Luxembourg, Netherlands, Portugal, and Slovenia. They will also start offering local accounts in the United Kingdom in late 2018 and the United States in 2019.

You also need a smartphone running iOS 9 or Android 5 or higher.

Opening an account in N26 bank is easily done in three steps:

The first and thirds steps are the same for everyone, but the second step varies depending on your residency. In section 2 below, I will first explain how it is done with a German address (through the app or at a post office), and finally how it is done for users outside Germany.

You start by filling out the N26 registration form. Just go here and click the Open Your Account button.

The country you sign up with will determine the features and pricing for your N26 account “forever”, even if you move to another EU country at a later date. 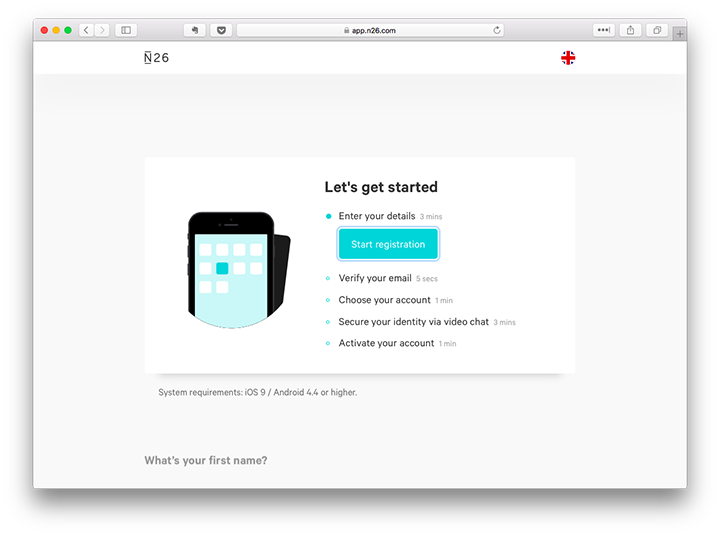 You will be asked to enter your:

Next, you’ll be asked for “the serious legal stuff” (standard AML—anti money laundering—questions), which includes your:

Finally you have to agree to their terms and conditions, and optionally opt in to product updates and some privacy settings. 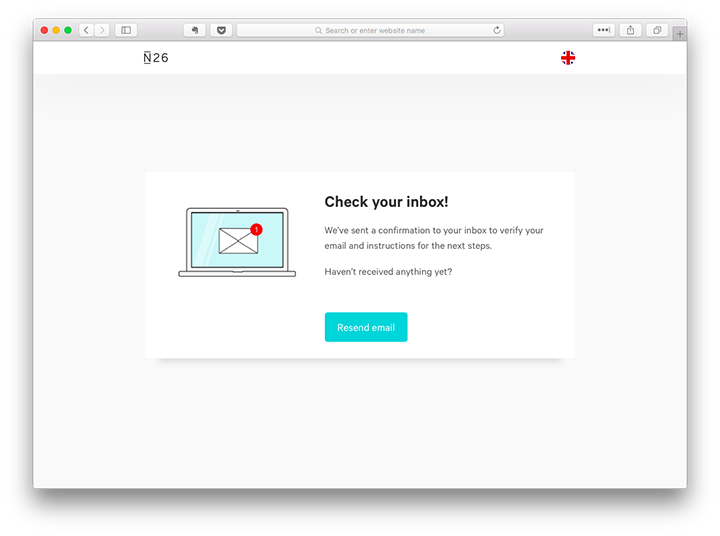 After you have confirmed your email, you can log in to your account and choose which N26 plan you want. Which plans you can choose from depends on in which country your delivery address is. If it’s in Germany or Austria you can choose between all plans:

If you’re unsure, just go with the regular N26 plan for now. You can always upgrade later. NOTE: If you select the Business plan you can not change to a personal plan later, so for most people I would not recommend it! 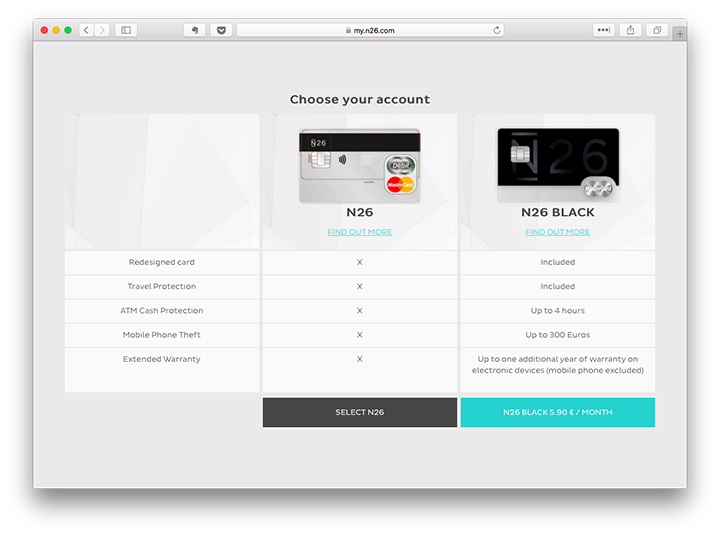 The next step is confirming your identity. Whether you can do this through a selfie or video call in the N26 app in a matter of minutes, or if you have to visit a German post office, depends on your nationality, ID documents, and delivery address of your card.

2.1 If your delivery address is in Germany

There are exceptions where an older passport, even from the mentioned countries, is not supported. That might be the case if it lacks biometric safety features—something most modern passports have.

If you don’t hold any of the passports or ID cards listed above, don’t worry. Just skip ahead to the section about the PostIdent method. 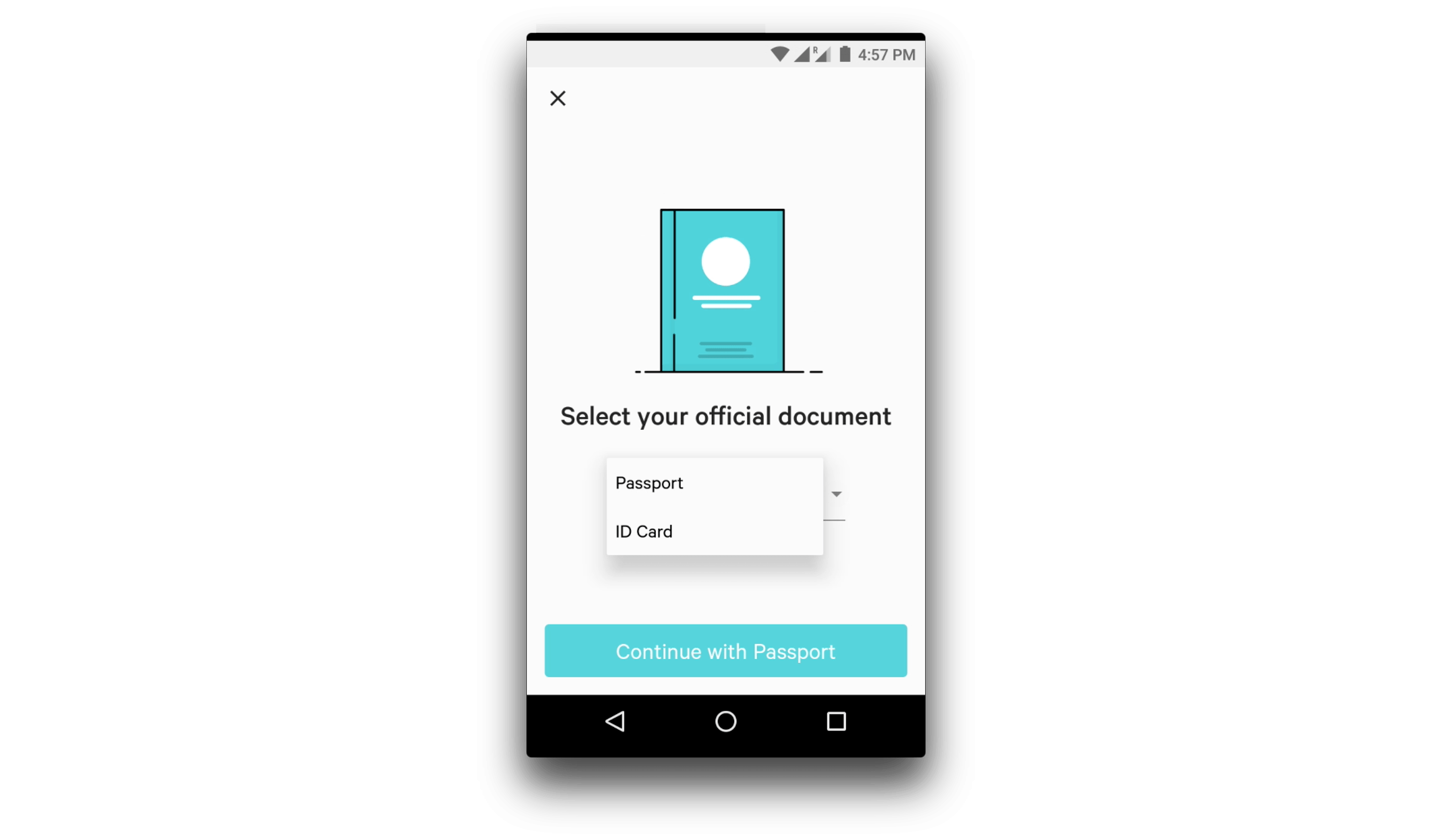 After you have completed the initial registration form, you’ll be instructed to download the Android or iOS app to complete the identity verification.

Make sure you have your:

Once you initiate the call, you will usually be connected to an agent without much delay. On some occasions you might have to wait a little bit, but rarely more than 5-10 minutes. Note that you can only do the video verification between 8 am and midnight German time.

During the call you will be asked to verify a few details from your registration form, as well as typing in a code sent to the phone number you registered with. You will also be asked to show your ID document to the camera in different angles so that the agent can verify that it’s legit.

If your delivery address is in Germany and you don’t have one of the ID documents listed above, your only remaining ID verification option is the PostIdent method. It is really only practical if you’re living in Germany or are planning to visit.

This is how you verify your identity using PostIdent:

Citizens of the following countries should use the PostIdent method:

2.2 If your delivery address is outside Germany

If you don’t have a German address, the ID verification is super simple: You just need to take a selfie and a photo of your ID document with the N26 app.

These are the ID documents for various nationalities that are supported through the N26 app:

Again, there are exceptions where an older passports without biometric features are unsupported.

If you don’t hold any of the passports or ID cards listed above, your only option is to open an account with a German address and go to a German post office.

After you have verified your email address, download the N26 app to your phone and log in. Make sure the lighting conditions are good so the pictures are clear.

Make sure you have your passport or ID card (according to the list above) and follow the instructions in the app. It shouldn’t take more than a minute!

The final step to activating your account is to pair your smartphone.

After you complete the ID verification, you will be guided through the steps for pairing your phone to your N26 account.

Make sure the number you entered during the activation is correct and click confirm. You then receive a four digit verification code via SMS and enter it in the app.

If you need to change the number you registered with, just contact N26 support and they will help you out.

Once you have paired your smartphone, you can use it to verify transactions such as SEPA transfers, Moneybeam, activating your Mastercard or Maestro card, and a few other things.

That’s it! Look out for your shiny new N26 Mastercard in the mail!

So what are you waiting for?

The Ultimate Guide to the Portuguese Golden Visa